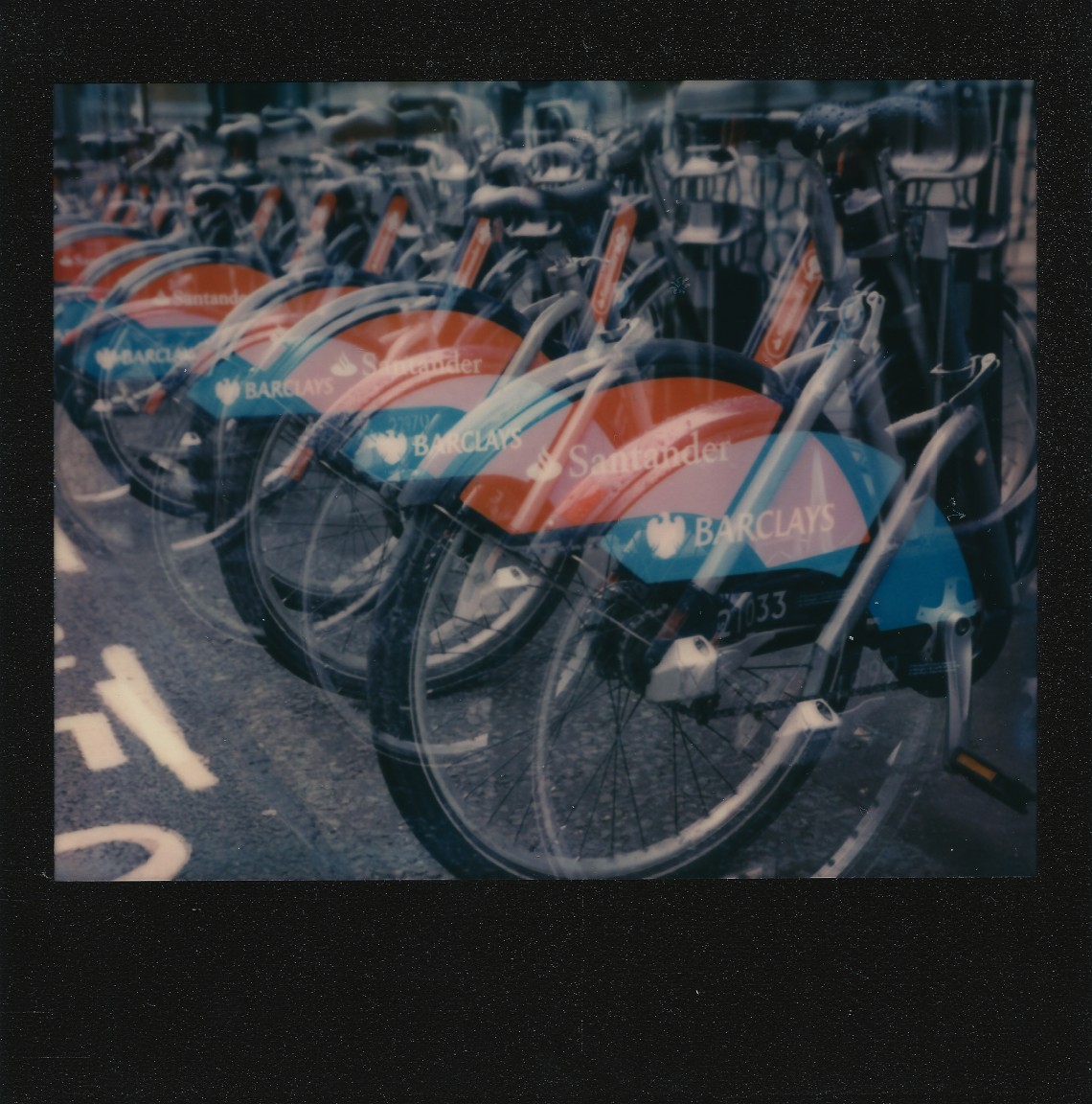 Love it or hate it, and whatever you may think of the users, the Boris bike (named after the Conservation mayor Boris Johnson) has been as synonymous as the red bus as a form of transportation in London. Since it’s introduction in 2010, it has always been blue and sponsored by Barclays Bank. However at the end of 2013, Barclays sponsorship decided not to renew it’s sponsorship deal beyond 2015 and eventually Santander jumped at the chance to paint the town red with it’s Santander bikes.

I had a bit of an eureka moment in February 2015, when the news was released to the public. I loved double exposures on the Spectra but now I had the idea to do a time delayed multiple exposure, capturing the first shot of the blue Barclays sponsored bikes, overlaid later with a shot of the replacement red Santander sponsored bikes. It would mean leaving one of my Spectras out of use for a few months.

There was a 2 month period (March-April) where the blue and red bikes were used in tandem. The first exposure was in late March and with the red bikes rapidly replacing the blue ones, I spent a wet Sunday afternoon trecking around London looking for a row of purely blue bikes that I could use for the first exposure. Most stations had already mixed colour bikes. Eventutally I found a series of blue bikes right outside my favourite burger joint, the fabulous MeatMarket in Jubilee Market, Covent Garden.

I was using my Spectra Pro, which allowed me easily to do a double exposures using the multiple exposure selector mode without doing the open film lid or closing the camera trick (as detailed at https://blog.the-impossible-project.com/spectra-double-exposure-how-to and http://snapitseeit.com/how-to-double-exposures-on-a-polaroid-spectra/). The only thing I had to make sure was to turn my exposure down.

Fast forward 4 months, August 2015, I returned to the same spot to take the second exposure. It would have been earlier but our newborn arrived in May and the mixture of blue and red bikes lasted into about June. Finally the out of action Spectra could finish the job. The only thing was would I succeed and do the shot/idea justice?

Handily, I decided to take a reference digital photo on my smartphone after I took the first exposure in March and along with some notes in Google Keep, I had enough information (or memory if you will) to roughly get it in the same place. I wanted to move a little to the left (or right) so I could give it kind of a printed 3D image effect.

So I composed and took the second exposure, and I quickly put it away for half an hour, with no expectations. What was done was done. It was 50/50 whether it would be a worthwhile shot and my idea realised. Then I finally looked at it and I was personally overjoyed with the result, a time-elapsed multiple exposure which would and could not be repeated, due to the confinement of time.

Yes I could have done it with digital, and yes I could have took 2 images shot digitally and Instant Lab’ed it, but this was my ultimate expression of taking the time to achieve a shot, far away from my trigger happy digital photography.

I am conceptualising what I want to do with the #2 in the series, but I have a few ideas already. Hope you enjoyed the picture and the story behind it! Many thanks for reading.